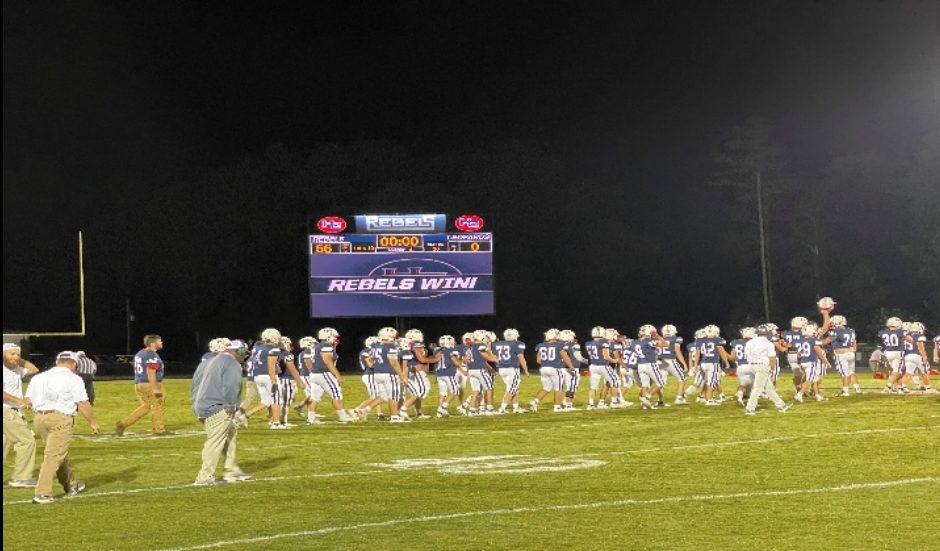 On Friday night the Haralson County Rebels hosted the Banks County Leopards on homecoming. The Rebels came into this game on a 2-game win streak, looking to keep the hot hand. Banks County came in off a loss to Fannin County last Friday night.

Haralson County received the opening kickoff, and they had a good, sustained drive that lasted over 7 minutes and ended with a rushing touchdown by Kaden Hughes. The Rebels would take a 7-0 lead on the Leopards.

Banks county’s offense stalled out and they were forced to punt on 4th down.

The following play Wesley Cole took it 70 yards for another Rebel touchdown to put them up 14-0 with a minute left in the 1st.  On the 1st play of the 2nd quarter Wesley Cole came up with a huge interception to give Haralson County the ball back.

3 plays in, Clay Hyatt faked the handoff up the middle and delivered a strike down the sideline to JoJo Chandler for a receiving touchdown. The Rebels would now take a commanding 21-0 lead on the Leopards with 8:21 left in the first half.

With just over 2 minutes remaining in the 1st half, Clay Hyatt busted a huge run up the middle for another Rebel touchdown.

With 58 seconds left in the 2nd quarter JoJo Chandler intercepted a pass and took it all the way to pay dirt to take a commanding 35-0 lead into half time.

Haralson Countys defense came up with a huge redzone stop to force the ball over on downs.

Clay Hyatt busted a huge 70 yard run up the middle for another Rebel touchdown. The Rebels were now up 42-0 with 2:37 left in the 3rd quarter.

Banks County fumbled the ball at their own 28-yard line to give Haralson County back possession of the ball.  The young Rebels took advantage of their great field position and was able to add another rushing touchdown. The Rebels would now go up 49-0 with 7:41 left in the game.

With just under 2 minutes left in the game Zack Sanders punched in the finale score of the game. Haralson County took a 56-0 lead on the Leopards.

Haralson County improved to (4-1) and will travel to Elbert County for their final game before region play. The Banks County Leopards fall to (1-4) and will play Union County next week.