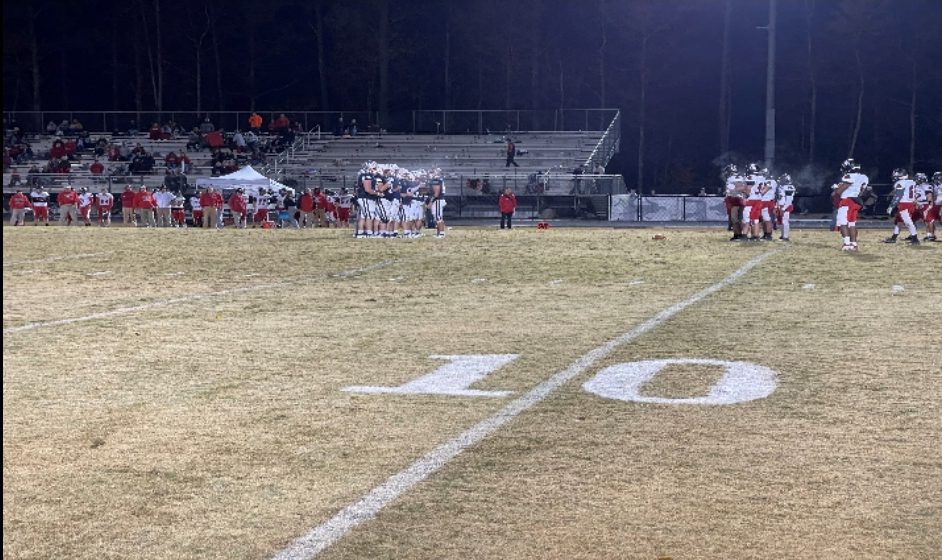 On the 1st night of the GHSA football playoffs the #1 seeded Haralson County Rebels (9-1) took on the #4 seeded Chattooga Indians (5-4). The Rebels are looking to extend their 8-game win streak and win their 1st home playoff game in school history. The Indians look to get back on the win column after dropping their last 2. The Rebels are looking to finally get over the hump and make it out the first round while the Indians find themselves back in the playoffs after missing out last year.

The Rebels won the opening kickoff and started the game 1st and 10 at their own 35. With just over a minute and thirty seconds off the clock Clay Hyatt took it 38 yards for the games 1st points. The Rebels wound make the extra point and go up 7-0. The Indians would go 3 and out on their 1st drive and punt it away.

At the end of the 1st the Rebels were on a long drive that started at their own 1. Haralson County would fumble in the redzone at the 11. The Indians would once again go 3 and out and punt it back to the Rebels. It wouldn’t take long for Clay Hyatt to bounce off tacklers and take it 22 yards for the score. The Rebels would hit the field goal and extend their lead to 14-0.

The Rebels defense once again swarmed to the ball and held strong on 3rd down to force another punt.  With 2:01 left in the 1st half JoJo Chandler dove his way in for a 5-yard touchdown. The Rebels now took a commanding 21-0. At the Half Clay Hyatt would already eclipse 100 yards rushing and have 2 rushing touchdowns with JoJo Chandler adding a rushing touchdown of his own.

The Chattooga Indians would receive the kickoff for the start of the 2nd half and set up shop 1st and 10 at their own 20. Rowan Burdick would end the hopes of a Rebels shutout after powering his way for a 16-yard touchdown run. The Indians would get on the board still trailing 21-7.

Clay Hyatt would get things rolling again with a 55-yard touchdown run for his 3rd of the night. The Rebels would go back up by 21 now leading 28-7. On the first play of the Indians next drive, they would fumble resulting in a turnover.

Coach Peavy would roll the dice on 4th down and fake the punt but come up just short from the line to gain. The Indians took over 1st and 10 at their own 21. The Indians would try a read option play and on the pitch fumble it leading to Jacob Rodriquez recovering it for the Rebels.

The Rebels wouldn’t have to wait long as Clay Hyatt bouncing off tacklers dove in for a 19-yard rushing touchdown his 4th of the game. The extra point would be no good and the lead would be 34-7.

The Rebels would extend their winning streak to 9 as the topped the Indians in the 1st round of the state playoffs. Clay Hyatt was doing Clay things with 4 Rushing touchdowns leading the Rebels to their 1st home playoff win in school history.

The Chattooga Indians (5-5) had their season come to an end with a 1st round exits after a hard-fought year. The Rebels improve to (10-1) and will host the #2 seeded Northeast (8-3) in the 2nd round of the GHSA playoffs.