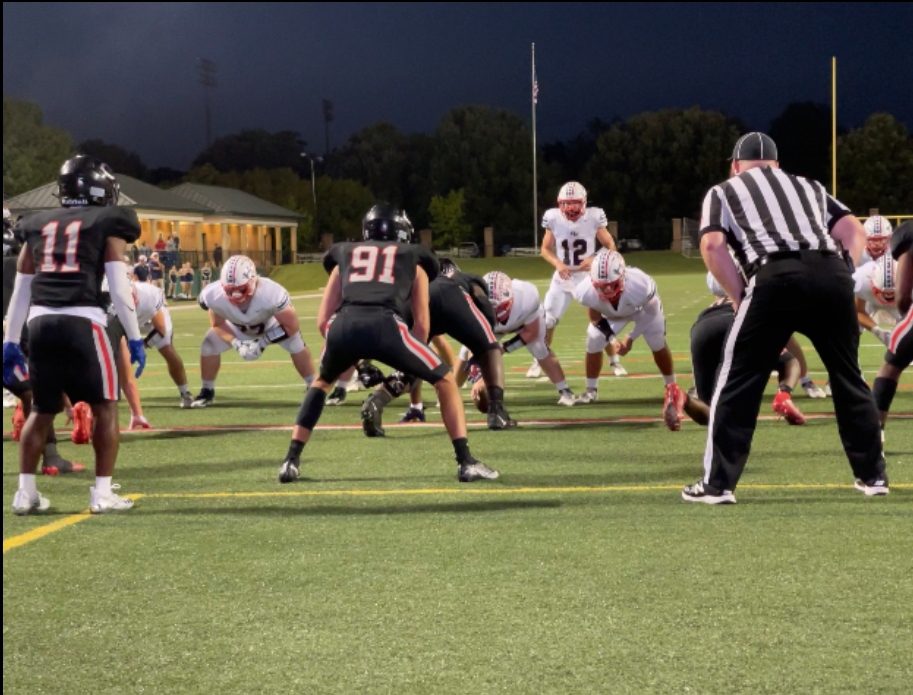 On Friday night the Haralson County Rebels traveled to Hogansville, GA to take on the defending state champs the Callaway Cavaliers for the start of region play. This game held huge playoff contention and was the game of the week in Georgia. The Rebels coming off a come from behind win at Elbert County, while Callaway suffered their first loss of the season to Thomas County Central.

Haralson County won the coin toss and elected to receive the ball to start the game. After the kick the Rebels would take possession 1st and 10 at their own 33 yard-line. It took less then 2 minutes for the Rebels quarterback Clay Hyatt to take it 54-yards nearly untouched for the first score of the game. The Rebels would jump on top 7-0 against the Cavaliers.

After a decent return the Callaway offense would set up shop at their own 34-yard line. Callaway’s quarterback dropped back for a pass on 3rd down and it was picked off by Haralson Counties Jerrod Rodriguez. The Rebels would be set up in the Cavaliers territory at the 42.

After a nice little drive Haralson Counties Clay Hyatt went up the middle for a 3-yard rushing touchdown, his second of the game. The Rebels now how taken a 14-0 lead with over 6 minutes still left in the 1st quarter.

Callaway would start their 2nd drive at their own 34. On their first play the ball was fumbled during the quarterback/running back exchange and the Rebels would recovery it. The Rebels now took over possession at the Callaway 29. Clay Hyatt would then burst through a huge hole on the right side and take it 29-yards for his 3rd rushing touchdown of the game. Haralson County had now busted the game wide open leading 21-0 with 5:44 left in the 1st.

Callaway would put together a decent drive but on 4th down the Rebels would force an incompletion to take back over possession. Haralson County would have a long drive that ended in a 3-yard rushing touchdown from none other but Clay Hyatt. The Rebels now lead 28-0 on the defending Cavaliers.

At the half Haralson County would have a demanding 28-0 lead on the defending state champs. Clay Hyatt had racked up over 100 yards rushing and 4 touchdowns, while Callaway had 3 turnovers that filled their stat line for the first half.

Callaway would come out firing to start the 3rd quarter with #6 Tre Main connecting with #14 Carlos Billingslea on a slip screen for a 15-yard score. Callaway would finally get on the board still trailing the Rebels 28-7.

The Cavaliers would force a quick 3 and out and take back over possession at their own 25. After a quick march down the field Callaway’s #10 Kier Jackson would take it in for a 8-yard rushing touchdown to put the Cavaliers back in the game. The score would now be 28-14 with 2 minutes left in the 3rd quarter.

Haralson County would take a huge gamble and go for it on 4th down deep in their own territory and convert. The Rebels JoJo Chandler would then bounce off tacklers on his way to a 24-yard touchdown run. The Rebels would silence any noise the Cavaliers fans had taking a 34-14 lead.

The Cavaliers would also attempt a 4th down play in their own territory but the Rebels Ethan Bell would come around the end and force a strip sack and recovery it at the Callaway 34. It didn’t take long for the Rebels Clay Hyatt to hit another wide-open hole on his way for a 6-yard touchdown run. Clay Hyatt would now have 5 rushing touchdowns on the night and the lead 42-14.

The Cavaliers would again fall short on 4th down and the Rebels would get in victory formation and run the remanding clock out. Haralson County would knock off the defending state champs and in a impressive way.

Shout out to the Rebels O-line Eli Salmon, Benny Parker, Colton Sanders, Brody Salyers, Riley Bell and Zach Burell as well as Kaden Mullins, Wesley Cole, JoJo Chandler and Caden Hughes for paving the way all night for Clay Hyatt who finished with 30 carries for 202 yards and 5 rushing touchdowns.