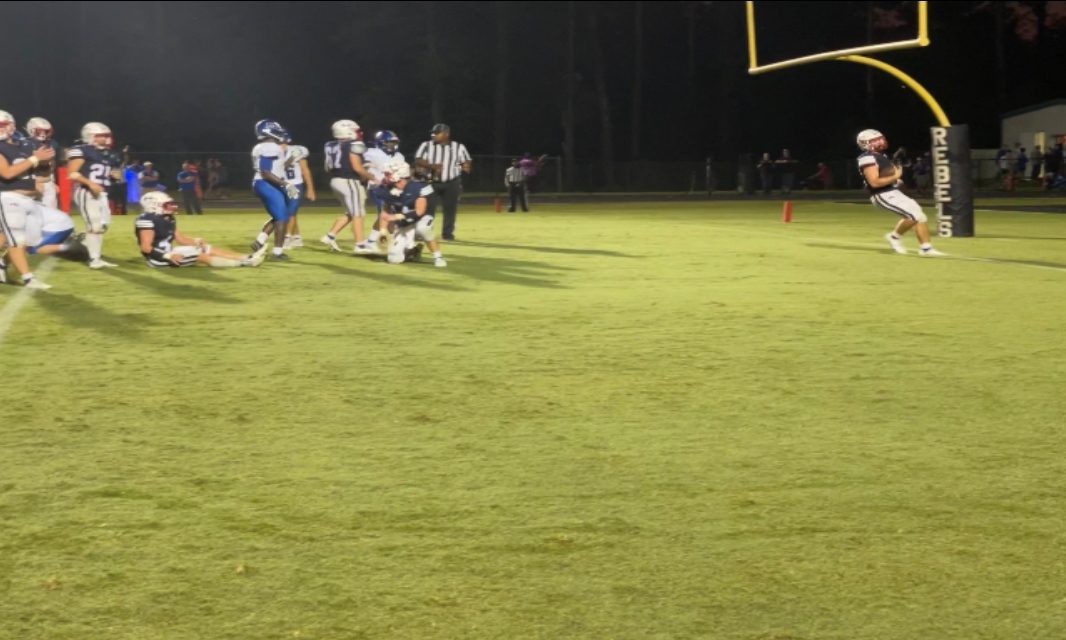 On Friday night the Haralson County Rebels (2-1), who were coming off a hard-fought win against Bowdon, took on the Model Blue Devils (1-2).

Haralson County came onto the field supporting the 13 fallen soldiers that lost their lives in Afghanistan.

Haralson County won the opening kickoff and after a attempted onside by the Blue Devils the Rebels started 1st and 10 on their own 49 yard line. It took exactly 2 minutes for the offense of Haralson County to get on the board. Clay Hyatt handed it off to Wesley Cole as he outran everyone to paydirt. After a successful 2-point conversion Haralson County was up 8-0 with 10 min left in the first half.

After a huge kick return to set Model up in positive territory their offense couldn’t get anything started and had to punt it away. Just a few moments later Haralson County coughed up the ball and Model recovered it on the 44-yard line.

With 40 seconds left in the first quarter Haralson County’s Kaden Hughes took it up the middle for a 3-yard touchdown. The following extra point was good and put the Rebels up 15-0.

After another stalled Model drive Haralson County’s Clay Hyatt takes it up the middle for his 2nd score of the game with the following extra point being good the Rebels would go up 30-0 with 12 seconds left in the half.

Model received the 2nd half kickoff and started at their own 32 but after not being able to find success they had to punt it away.

After a clock consuming drive, the Rebels Clay Hyatt takes in his 3rd rushing touchdown of the game and the extra point was good. The Rebels take a demanding 37-0 lead on the Model Blue Devils.

With 2:40 left in the game the young guys from Haralson County were able to put in the finale score of the game making it 43-0.

Scott Peavy the Head Coach of the Rebels reached a milestone of 100 wins.

Haralson County improves to (3-1) on the year and will be off this coming up Friday.

Model drops to (1-3) and will also be off this Friday.