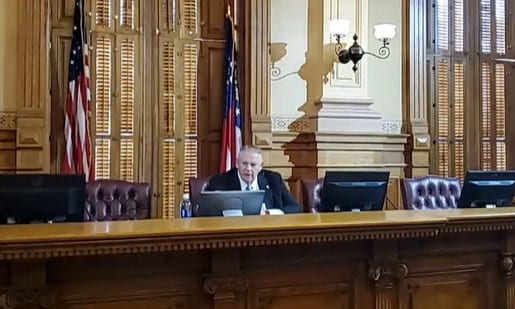 ATLANTA, Ga – During the pre-legislative conference, Georgia Speaker of the House David Ralston confirmed they would form a special committee concerning election integrity.

The committee will devote its “full attention” to restoring confidence in the election process. Several Georgians continue to believe voter fraud occurred in the presidential election, but three recounts confirmed the results.

Ralston added new voting legislation could be introduced this session.

“I don’t see any reason why we couldn’t pass significant measures this session, assuming the governor approved them and signed them into law,” Ralston commented.

The members of the committee will be announced next week.

However, Ralston urged caution before making too many changes to existing election laws. One change he supported was ending jungle primaries. He asked potential members of the committee to include that provision in any legislation brought forward.

When questioned, Ralston didn’t commit to removing no-excuse absentee voting in Georgia or removing the 50 plus rule for Georgia elections.

“I’m certainly going to listen to both sides of that and frankly I don’t know where I’m going to come down, but someone is going to have to make a very strong case,” Ralston stated.

He added that Republicans in Georgia and across the country will need to create a path forward.

“Our Republican party, and frankly our government, is at its best when we’re working for our people. We address fundamental issues that make people’s lives better. We have to turn our attention from those seeking to divide us and focus our attention on the work that brings us together,” Ralston remarked.

Other items for the 2021 session include COVID-19 relief, mental health, education, and more.