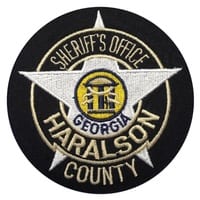 On Tuesday, March 2nd, 2021, at approximately 6:00 p.m., as a result of an investigation that has spanned several weeks, Sheriff Stacy Williams placed Detention Officer Brandy “Joelle” Guthrie under arrest and immediately terminated her from employment with the Haralson County Sheriff’s Office. Guthrie, who had begun her employment with the Sheriff’s Office in October of 2020, has been charged with Crossing a Guard-line with Contraband and Suspected Drugs and Violation of Oath of Office, both of which are felony charges.
Shortly after taking office at the beginning of the year, Sheriff Williams had directed his staff to investigate complaints and allegations on criminal activity occurring within the jail facility. Captain Edwin Ivey, the Jail Division Commander, spear-headed the investigation, along with the crucial assistance of Sergeant Heather Browning, Investigator Heather Mecillas, and Sergeant Callie Chambers. During the course of the investigation, several inmates were identified as being involved in a conspiracy to bring drugs into the facility, and evidence indicated that it possibly involved at least one employee.
One two separate occasions during the investigation, methamphetamine, marijuana, and Alprazolam were intercepted during their attempted delivery into the facility by Captain Ivey and his jail staff. Earlier this date, suspected methamphetamine and contraband were located in the possession of inmates by jail staff conducting a search, which had apparently been delivered to them by Guthrie. After the initial discovery of the drugs and contraband within the facility, Sheriff Williams called upon the assistance of the Haralson-Paulding Drug Task Force and the Paulding County Sheriff’s Office K-9 Unit, which aided in the location of more items.
In relation to the charges against former employee Guthrie, four inmates have been charged with possession of drugs and contraband within the jail facility: Dustin Mullins, Randell Eric Clayton, Christopher Bynum, and Tobias Anderson. Additionally, as a result of the on-going investigation by Captain Ivey, Mullins, Anderson, another former inmate, and a former employee will be facing separate charges from the previous incidents and intercepted drugs.
Sheriff Williams stated, “This agency and this administration will hold ourselves and our employees to the highest standards of professionalism. Allegations of employee misconduct will be investigated thoroughly, and any employee who tarnishes their badge or betrays the trust of their office will be dealt with swiftly and justly.”
This investigation is on-going; no other information will be released at this time pending completion of the investigation.
charged detention officer felonies Haralson County Investigation terminated